It’s been a while, hasn’t it. You’ve aged a bit, I can see, but only in such a way that that aging has endowed you with a beauty and wisdom that was unreachable in your relative youth. You’ve really come into your own. We’re proud of you. For real.

Have we aged? Perhaps. We Decemberists have done a lot in the interim of time that has passed since we last tread the boards on the Popes of Pendarvia Tour, that jaunt that took us around the world (or at least greater North America and a few spots in the UK and northern Europe) performing songs from our 2011 long player The King is Dead. What halcyon days those were! Sure, we’ve kept busy. We’ve appeared on a few television shows, recorded some songs for various soundtracks and collaborative records. But we were never really yours then.

Well, here we are. Like a wayward college grad (philosophy/english comp lit) returning to the welcoming arms of his parents, we return to you.

The Decemberists are releasing a new record in January. January 20th, 2015, to be exact. It’s called What A Terrible World, What A Beautiful World, which pretty much sums up the state of things since last we graced your record player, wouldn’t you say? You can pre-order this record, which features a particularly lovely cover by Carson Ellis, the Decemberists’ ever-obliging in-house illustratrix, at the following URL: http://smarturl.it/TheDecemberists Lots of goodies to be had in the d-luxe edition. MASONIC BANNER? Get out of here. 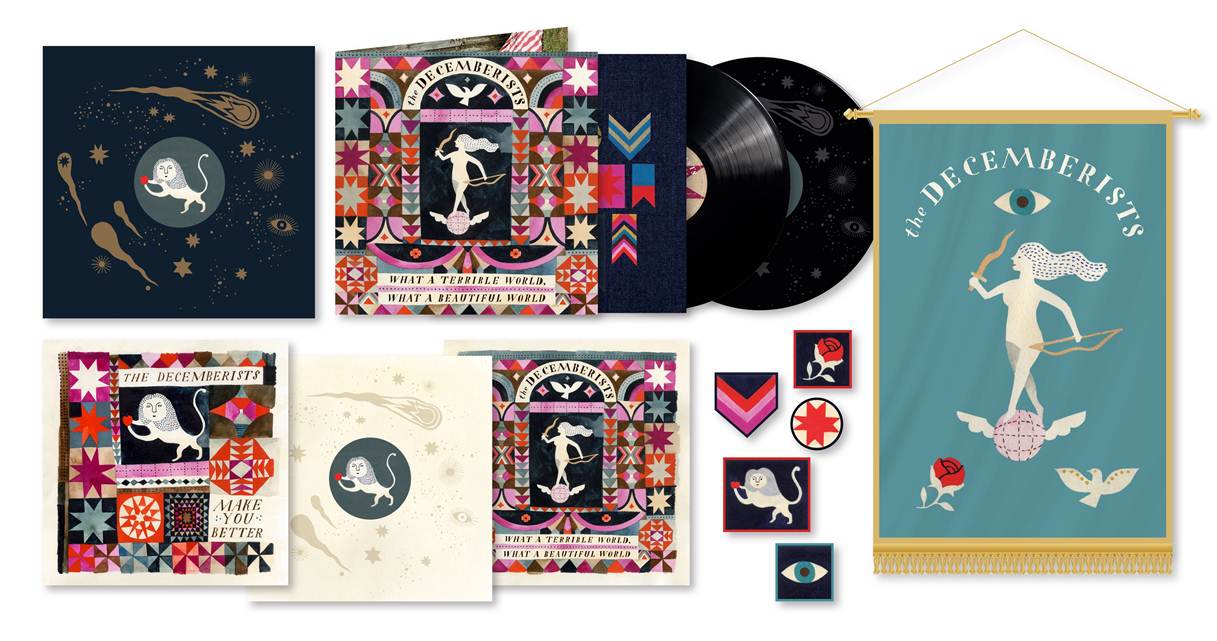 Songs, you ask? Will this long playing record have SONGS? Oh yes, dear mailing list recipient, it will have songs. Fourteen songs, to be exact. You can currently stream "Make You Better" and get an instant download of the song when you pre-order. As for the rest, here they are, in the order in which they were painstakingly arranged:

We will be playing these songs, among others, for your enjoyment on a tour that will no doubt bring us around the world once again (at the very least around Europe and greater North America). Consider this your invitation to attend. If you do not see your choice city of inhabitation on the list below, be patient. We will be announcing more dates as the weeks unfold. If, in the end, we are not playing your city, we apologize. We can’t play everywhere. Let me tell you a story. There once was a boy who lived in a small town in Montana. He loved music. More specifically, he loved a kind of music played by bands who rarely — if ever — included this boy’s small town in Montana on their tour routing. Instead, he was forced to drive or hitch a ride to various metro centers of the Pacific Northwest, which were often 10 to 12 hours away from his small village. He bore this burden begrudgingly, but in the end it maybe made him a better person. So there’s that.

We truly hope you like this record. We made it with care and love. It has lots of good songs on it. We think you’ll like many, if not all, of them.