It’s your last chance* to preorder aÂ DELUXE BOX EDITION ofÂ The King Is Dead, and still receive it by the release date, next Tuesday (depending on your location).Â  If you haven’t already, you can order one now atÂ thedecemberists.com.Â  In addition to the Deluxe Box Edition, we’re offering a 72-page hardcover photo book (with CD and DVD enclosed) featuring over 250 of the Autumn de Wilde polaroid photographs and illustrations by Carson Ellis. You can also preorder the album on vinyl, CD, or as a download.Â  Visit thedecemberists.com to see all the offerings.Â  Below is a note from Colin describing the origins of the aforementioned Deluxe Box and the one-of-a-kind polaroid photos that come with it. 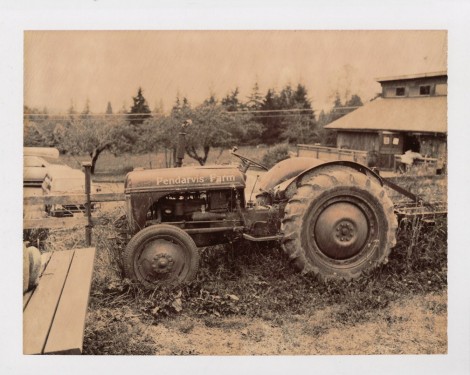 One night on Pendarvis Farm, whilst merrily roasting tofu dogs over an open campfire, we Decemberists, along with our esteemed Management Representatives and a certain Missus Autumn de Wilde, photographer superieur, hatched a plan wherein Mizz de Wilde would document the making of The King is Dead on Polaroid film, a full 2500 photos to be exact, and we would then include one of those unique photographs individually in each of the DELUXE BOX EDITION of the record.Â  Naturally, this is the sort of cockamamy scheme that lodges itself in the minds of perfectly sane adults while under the influence of a bucolic, Arcadian Oregon summer; the expense was deemed too great.Â  This is where The Impossible Project came in; they are a group devoted to the survival of Polaroid films of all sorts and collect or manufacture this ever-rarified breed of film in order to sell or donate it to photographers worldwide.Â  They liked our idea; they donated us the film.Â  And so here we are, this dream fulfilled.Â  Ms. de Wilde followed us Decemberists around all summer, snapping Polaroids; we posed obligingly. And one of those photos could be yours.Â  -Colin

SeveralÂ The King is Dead listening parties will take place this week and weekend across the country.Â  The first ten fans at each location will receive a poster featuring a selection of the Autumn de Wilde polaroids and all attendees will be entered in a raffle to win a Deluxe Box Edition ofÂ The King is Dead and a pair of tickets for a Decemberists show.Â  It’s free to attend.Â  Here’s a full list of events:

To celebrate the official release ofÂ The King Is Dead, we’ll be playing a short set and signing albums at Music Millenium in Portland, OR on Tuesday the 18th at 7pm.Â  Details availableÂ here.Â  And, in other news, you can listen to Colin’s interview with Weekend All Things Considered this weekend.Â  VisitÂ NPR’s site for air times or to stream it online.

Rehearsals begin in earnest this weekend here in Portland for the Popes of Pendarvia World Tour. Tickets are selling swiftly and we expect the entire tour to sell out (sans Montreal and Antwerp, though stranger things have happened), so if you’d like to come, don’t wait too long!

*Unfortunately in some places, and for orders of more than one box, it may already be too late to still receive your box by Tuesday.Â  But we’ll get it to you as soon as we can!