We are as pleased as we possibly could be to announce to you, O gentle mailing list subscriber, that The Decemberists have made a new record. It’s called I’LL BE YOUR GIRL and is set to come out on March 16 on Capitol Records (Rough Trade Records in Europe). We could not be more proud of it.

We recorded the eleven-ish songs during the early fall in Portland, Oregon, with noted producer and ailurophile John Congleton. You perhaps may be familiar with some of the work he’s done with such bands as St. Vincent, Lana del Rey, Wye Oak, Angel Olsen, Swans oh, everybody, really. He’s a bit of a goer, production-wise. The songs tend to the darker, more absurdist side of things I mean, how can you blame us and features a lot of nice vintage synth work by Jenny and Chris, some heavy drumming from Mr. Moen and, of course, the sort of baroque bass work you’ve come to expect from the former Mr. Lincoln High, Nate Query. All in all, everyone acquitted themselves quite nicely. This is the album art, which was done by illustratrix extraordinaire Carson Ellis. She was nominated for a Grammy last year, you know, for her work on the deluxe package of our last record. Thanks, Carson! 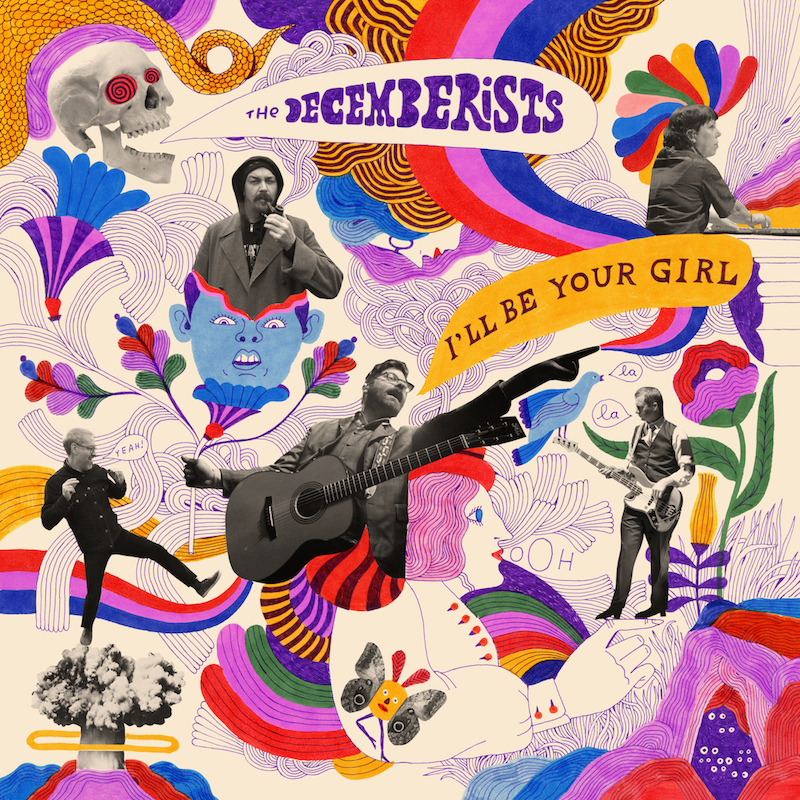 You can listen to a track off of it now, one called Severed. Lots of foreboding. Fun guitar line. Cool arpeggio. We hope you like it. We also made a video for it, which you can watch right here.

You can pre-order the record NOW HERE.

We’re in the process of knitting together all of the components of what promises to be a behemoth of a deluxe edition of this record, a mystery box we’re calling I’LL BE YOUR GIRL: THE EXPLODED EDITION. Too soon to go into detail on this project. We’ll keep you updated as we know more. Extra tracks, exclusive art, wild packaging it’s all to be expected. COMING SOON.

Also, we invite you traipse over to our remodeled webshoppe and peruse the newly designed items we’ve introduced lots of great shirts, hoodies, caps, pins, cups and more. These items are available to be bundled with your pre-ordered album, which, we might add, includes a limited edition orange colored vinyl. So much goodness.

We will, of course, be going on tour to play these songs for you (this is not the 90’s anymore, people, where you could make a record and then just f*ck off to some Latin American paradise to sit in a hammock for six months, oh no). This tour has been thoughtfully dubbed the YOUR GIRL / YOUR GHOST WORLD* TOUR 2018 and will likely be coming to a large to mid-sized borough NEAR YOU, if not entirely surrounding you. You can find all the dates and pick up pre-sale tickets while supplies last. (If you miss out, public tickets go on sale this Friday).

You could attend these shows as a typical concert goer, purchasing a face-value ticket, appearing at the venue at the posted time, having a lovely time, leaving the theater to find yourself greeted by that selfsame malaise, that feeling that maybe there was something more, just there, in your grasp OR YOU COULD BE A SUPER DYNAMITE ACTION CONCERT GOER by opting for THE WHOLE SHEBANG SUPER CONCERT ACTION PACKAGE. Along with securing great seats, you’ll be invited to a pre-show performance and Q&A with the band, receive a signed poster, and much more. We kid, but these are actually pretty cool and have been a blast to do since we started doing em last year. TWSSCAPs (as they are fondly known) are available now.

That’s it for now, folks! Can’t wait for you all to hear the record and to see you on the road!

* mostly North America for now, perhaps a bit of the UK and Europe plus parts of Australia later on if we’re really up to it