Hello again! It’s really been too long since we cluttered your inbox. We here at Decemberists HQ can’t really imagine what the state of your inbox must be these days, what with a presidential election on and your mother incessantly blowing you up about the massive sinkhole that’s just opened in her backyard, all reeking of sulphur and, strangely, marmalade. We get it. You’re a busy person.

The Decemberists, in conjunction with Keith Baker, game designer par excellence, and Carson Ellis, illustratrix, have made a tabletop game. Sort of a card game, sort of a board game. Sort of a bit of both. But a whole lot of one thing: AWESOME-NESS.

It’s called ILLIMAT and this is what it looks like: 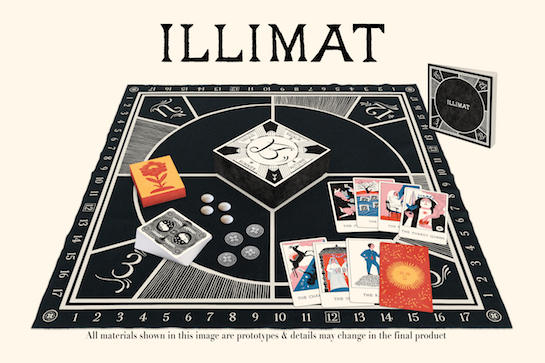 How did this come to be, you ask? Very astute question. See, back in early 2009, in the wake of another watershed presidential election, the Decemberists were prepping to launch the record The Hazards of Love into the world. They were doing what most bands do in preparation for such an event: trying out new hairstyles, inviting people to be in their band, and participating in photoshoots. As is their wont, they were searching about for something to do in said photoshoot when it occurred to one of them that they should pretend to be a secret society that met in out-of-the-way places to play a strange, inscrutable board game. They tasked Carson and photog Autumn DeWilde to make a game board for such a caper and voila: there survives, to this day, a few rolls of film with The Decemberists playing a weird-looking board game in a room of the Ace Hotel. Such is life. (We did make a t-shirt out of it, which some of you may own. You were confused then; hopefully you still remain confused.)

However! FLASH FORWARD TO 2015: The band, having played many board games on the road during their down time ‘twixt soundcheck and show, decided to try and make this strange game-board-without-a-board-game into a real living, breathing game. They invited renowned designer Keith Baker (Gloom, Phoenix Dawn Command, Eberron) to give it a shot. With a little input from the band, Keith retreated to his mountaintop hermitage and studied the game board for an entire year, only returning to civilization once he had a finished game to show. And what a game it was — a game that is as classy as it is classic, as fun as it is demanding; a game that feels of its time, yet weirdly out of time altogether.

We’re working with Portland game publisher Twogether Studios to fund the game via Kickstarter — AND IT’S LAUNCHING TODAY! Head on over to Kickstarter to look at the game, see how it’s played and maybe, just maybe, take a gander at the various reward levels and figure out where you fit. Ask yourself: just how much money you would heap on such a marvelous creation in order to have one for your very own self? Everyone will have a different answer. You are all, each of you, unique flowers.

But maybe you’re like: WHAT’S KICKSTARTER? Well, no need to be ashamed. Head on over to this helpful Kickstarter FAQ page and you’ll like have many of your questions promptly answered.

Welcome to the Society of Luminaries, initiate.